One of my goals for 2021 was to do something with fresh, local, Ontario Sour Cherries. Of course, my first impulse [And wasn’t it the best of impulses? I think so!] was to make a batch of cocktail cherries akin to last year’s Boozy Cocktail Cherries. The main difference between my two recipes was that I made a slightly thicker/sweeter syrup to balance out the sourness of these cherries and to ensure a proper can. I also adopted the practice of simmering my cherries before canning, as it results in less shrinking post that 20-25 minute bath in the boiling pot of water. Here’s my recipe! Enjoy!

Choose your own spirits to add to your preserved sour cherries!
Servings: 3 Pints

You may have syrup left over after filling your jars. Enjoy it in a glass of seltzer or a mixed drink! The liquid in the jars will be boiling and bubbly once removed from the canner. As the jars cool, the bubbles should dissipate. You may see a bit of settling in one or many jars. This is normal. As long as you provided the right amount of headspace at the outset of canning, and as long as the cans have sealed properly, you should be fine! Fruit above the liquid mark may darken slightly. However, this should have no effect on the taste or consistency. You may wish to consume the settled jars first. A good rule of thumb with canning is to err on the side of caution. Put that jar in the fridge and use it first, give it as a gift to friends and tell them to do the same, or combine and reprocess as set out below. Within 24 hours of canning, if the fruit has settled more than desired, you may re-can in smaller jars or combine cherries in jars, re-seal, and re-process. You may have to make a bit more hot syrup to top the cherries properly to reach the required headspace. But that’s easily done. When re-canning, warm the fruit in its syrup, place in warm sterilized jars with new warm lids. Reprocess for 15-20 minutes + 5 minute cool. Your cherries may be slightly mushier after a second bath. But I’ve done this with some success, and none the wiser. This recipe follows the general instructions in the Bernadin guide to canning cherries in syrup. 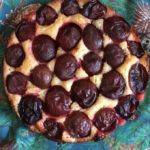