One of the goals I set for my epic 2020 to-do list? Make more preserves and pickles than last year! Along with my killer marmalade [Fait accompli!] the makings of a good Manhattan have been top of mind.

Last weekend, after procuring three small bags of organic sweet cherries, I bought myself a good cherry pitter, sterilized my jars, topped up the sugar container for an epically good cause, and raided the bar cart. The results? Six pints of boozy cocktail cherries: three Bourbon and Cointreau with a hint of Cinnamon and three Rye with a hint of a Maple. [I would have had 6.5 pints, but, well, read on…]

Why does everything during this pandemic seem so MAGNIFIED? My recipe is SOLID. But this Saturday’s canning session was smooth sailing and not-so-smooth sailing.

Happiness is a fabulous cherry pitter? The OXO Good Grips Cherry and Olive Pitter* made swift work of 12 cups of cherries! I broke my right hand a few years ago. I play piano. And I like to write first-drafts by hand. So, I was quite pleased with how little squeezing I had to do and with the soft grip. I’m usually skeptical of specialized kitchen tools, but this one’s golden!

Also good? The ease with which my recipe comes together. Canning fruit is SO MUCH EASIER than making jam! You simply make a light syrup, put your pitted cherries in the jar, add some booze, top up with syrup [leaving about double the headspace than for jams/jellies, mind you], and, assuming you want to your cherries to have a shelf life, process them in a hot water bath.

Then, there were the circumstances BEYOND my control:

Canning requires a certain amount of caution and precision. Even so, losses happen. This Saturday, as I was pulling the LAST jar of my FIRST batch of boozy cherries out of the water-bath (and thank goodness it was the LAST of the jars!) I had a break. The bottom of the mason jar split off cleanly from the rest of the jar. A half-pint of Rye & Maple Cherries released themselves into my water-bath. Not only had I lost my precious ingredients, I had to let the water and the pot cool enough to handle before I could dump it into the sink, wash and refill, and wait for it to come to a boil again.

I really dislike those few instances in which canning feels wasteful. May they be as minimal for you as they have been for me!

Then, on my second go-round, one of my jars was leaking from the rim as I pulled it out. Now, a leaking jar does not mean that it won’t eventually seal, once the contents of the jar settle down and it begins to cool. While leaking may be a sign you’ve left too little head-space at the top, if the lid seals as it cools and makes that magic popping noise, you’re good. [Though, on balance, it’s probably better to use it sooner rather than later.] However, this was MAJOR spillage.

I am not one to take chances. And I didn’t want to have to use this larger pint straight off. [I’ve still got name-brand open in the fridge]. So, into a new jar with a new lid the cherries went. I topped them up with a bit of extra syrup and booze and bathed them again. This jar won’t be giftable, as the cherries may be a bit softer due to longer processing time, but at least I know they can sit on the shelf for a year or two before I crack them open! Uggh. More work!

Still, now I have 6 pints of cocktail cherries! As much as I envision ALL of these babies going into cocktails in the stormy winter months, I also have a fantasy of a very indulgent banana split: three different flavours of ice cream, hot caramelized bananas, fresh vanilla whipped cream, and a boozy cherry on top of each scoop.

I keep thinking of Christmas, too. And what a lovely gift these cherries [or jars like them ;)] will make. I’m feeling downright lockdown-hoardy with my six pints…So, I guess I’ll have to make some more before the window for fresh cherries passes. [And design some fancy labels!] I might also do the same with my backyard serviceberries! We rarely have enough for jam…but a few quarter-pints of brandied saskatoons? Just try and stop me. 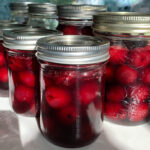 You may have syrup left over after filling your jars. Enjoy it in a glass of seltzer or a mixed drink!  The liquid in the jars will be boiling and bubbly once removed from the canner. As the jars cool, the bubbles should dissipate.  You may see a bit of settling in one or many jars. This is normal. As long as you provided the right amount of headspace at the outset of canning, and as long as the cans have sealed properly, you should be fine! Fruit above the liquid mark may darken slightly. However, this should have no effect on the taste or consistency. You may wish to consume the settled jars first.  I neither refrigerate-and-use-promptly nor do I reprocess properly sealed jars in which the fruit has settled unless it has settled more than 3/4  of the jar [1/2 pint] or 2/3 of the jar [pint].  A good rule of thumb with canning is to err on the side of caution. Put that jar in the fridge and use it first, give it as a gift to friends and tell them to do the same, or combine and reprocess. Within 24 hours of canning, if the fruit has settled more than desired, you may re-can in smaller jars or combine cherries in jars, re-seal, and re-process. You may have to make a bit more hot syrup to top the cherries properly to reach the required headspace. But that’s easily done. When re-canning, warm the fruit in its syrup, place in warm sterilized jars with new warm lids. Reprocess for 15-20 minutes + 5 minute cool.  Your cherries may be slightly mushier after a second bath. But I’ve done this with some success, and none the wiser. In my limited experience as a home cook, organic cherries have shrunk less than non. So it may be worth a splurge, here, if you’re gifting. This recipe follows the general instructions in the Bernadin guide to canning cherries in syrup.

[*Note, I’m NOT sponsored by OXO and my new cherry pitter was NOT a freebee from a local shop. I am seriously impressed! I’ve linked to The Bay, here, but you can find this pitter at many kitchen shops and hardware stores!] 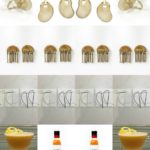 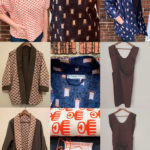 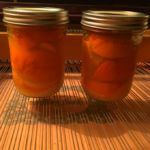