If you’re going to eat sugar, butter, flour, and cream, you’d better do it right. This is my go-to recipe for the best Pumpkin Pie I know.  Let’s get straight to the recipe. 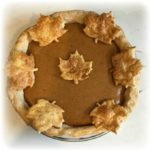 Pumpkin Pie with Sweetened Condensed Milk and an All-Butter Crust

You can create "maple leaves" or any other cutouts you'd like to top your pie by cutting out pie dough scraps with cookie cutters, making "veins" on them with a sharp knife, and drizzling a bit of sugar and cinnamon on top. Then, place them on a parchment-lined cookie sheet in a 350 oven for 10+ minutes, keeping a close eye on them to make sure they don't burn on the bottom. Place them on top of the baked pie.