I’m superstitious about September, or, its having me in knots. I often do a social media blackout just to maintain some sense of equilibrium. This year, I took a different kind of breather, challenging myself to walk 300 kilometres, or an average of 10k per day. On twenty-nine of those thirty days, I walked. Though, a few of those “walking days” consisted only of brief jaunts to my local coffee shop.

Here are some highlights:

Due to the nature of the freelance work I take on each fall, I spread my work in shorter stints. This year, I decided to tackle those work bits in the early morning, when I usually like to walk. Resultantly, I went for sunnier walks, and explored a lot of unfamiliar-to-me green spaces I wouldn’t have taken on at 5:30am in the dark, even with the dog.

At the beginning of the month, I walked to my annual eye appointment downtown and saw my first wee burst of fall colour. It wasn’t much, but it was a testament to the optician’s confidence.

One drizzly afternoon, Elvis and I explored parts of the Waterfront Trail along the Scarborough Bluffs we’d never taken before. He sniffed the wet dahlias. When we got home, not-quite-soaked-yet, he snuzzled in his fave towel, and it really started to pour.

I used sunnier daytime walks to deliver homemade gifts. One day, I mistakenly delivered a jar of cocktail cherries to the right house number on the wrong street! I ended up backtracking two blocks [ie sprinting] to retrieve said jar from the mailbox. Luckily, someone was pulling their car out from in front of the mistaken house, so I was able to ask her if it was her home and identify myself as your friendly neighbourhood wacko instead of getting investigated for postal theft. Wouldn’t have mattered if I had sinned. After I dropped the jar at the right house, I found Jesus.

Speaking of momentous occasions, I dropped my daughter off for her last first day of school and successfully navigated ALL OF THE EMOTIONS, including the ones in graffiti, below, walking home through the local ravine. I stopped and listened to a charm of finches near an abandoned tennis court [not pictured].

Twice, I walked to Saint Lawrence Market. [My first trips to the Market since March!] The first time, I loaded up on all of the treats we hadn’t had in months and took transit home. The second time, limiting my purchases to a single meal and a block of cheese, I came home via the Don River trail, which I haven’t travelled much since we used to live in Cabbagetown [pre-kids]. I used to go down in there to “skip” for fitness. I don’t feel nostalgic for the skipping much.

I found yet another Canoe Porch! This mammoth even blocks the door!

I also got one super-fab erroneous sunrise street shot!

In the middle of the month, I walked 10k to some outlets in Scarborough in search of replacement walking shoes. I struck out on size-options with the sneakers…

…But, discovering I had banked several “credits” buying kids’ shoes over the years, I came home with a pair of slippers. Replacing the old gray tattered mocs I’ve loved to death for more than a decade with a new colourful pair was way more fulfilling than swapping out my dead-in-six-months runners for another, anyway.

On the way home, I saw this lurvely heron in the Warden Woods.

Banking on my success, I considered walking all the way to Ikea North York via Toronto’s green spaces. While I decided against that particular 16+ kilometre hike on what turned into a foul-weather day, I mapped it out. And, eventually, I explored the entrance to a whole series of trails I haven’t yet navigated. Now, I have this secret plan: to have a socially distanced high-tea in those woods with a friend or group of four. Just think of the shadows we would make, ourselves!

As the month advanced, the leaves really started to change.

Blessedly, I did not experience the FOMO I thought I might experience at the 2/3 point of the month, when I discovered that some of the awesome people in my Insta feed aren’t just running and walking, they’re taking part in these really serious “virtual treks” across famous places, like the Camino de Santiago or the British Isles. This is very appealing. I immediately had a vision of myself walking “virtually” across France’s wine coasts, perhaps with actual stops for wine! But I didn’t feel at a loss, because I’d been having so much fun discovering, re-discovering or re-re-discovering Toronto and the sweetness of Scarborough.

Last Sunday, I walked along the aforementioned new-to-me portion of the Waterfront Trail once more with a friend who lives even closer by and who also hadn’t explored it much. We stopped to look through some iron gates at an Airstream perched on the edge of the Scarborough Bluffs. [Sorry, not pictured!] And a pair of lifetime east-enders passing by told us about the house which used to stand there and which fell into the water below. Gotta love a good local tale. It’s putting me in a mood for some old-fashioned October horror consumption! [No, child! Don’t touch the berries on the Virginia Creeper!]

Oh, but the joys! On the last September Monday, I not only found the deepest of fall colours…I discovered that my beach-walk friends of several years live along one of the non-beach-routes I’ve taken for ages. They well-nigh cat-called me from their driveway, and we had a very distanced cappuccino in their back garden. Elvis was in heaven, too! I think it felt like this, especially the golden bit:

I took a lot of conscious, full breaths.

I did not take enough hot baths.

And, I recognized the sky writes itself most of the time. 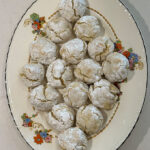 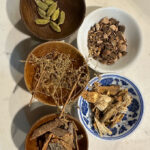